The performance of the world’s second-largest economy exceeded market forecasts when GDP numbers were finally released on Monday, but the third-quarter data did not come close to allaying concerns about China’s direction after decades of underpinning global growth.

Delayed by almost a week without explanation — although a clash with China’s Communist party congress is suspected — the announcement of 3.9 per cent GDP growth came with little fanfare. It was better than the forecast of 3.3 per cent from analysts polled by Bloomberg but still short of China’s full-year target of 5.5 per cent, already set at its lowest in three decades.

Other data, also delayed, painted a more nuanced picture of the predicament facing Chinese policymakers. House prices in the secondary market fell by the highest month-on-month rate since 2014, reflecting a property crisis. Growth in retail sales, just 2.5 per cent, missed forecasts as strict Covid lockdowns continued to hold back consumption.

“The actual economic recovery momentum is not strong,” said Ting Lu, chief China economist at Nomura. Despite the latest outperformance, he expects growth of just 2.8 per cent in the fourth quarter.

Within China, the data were interpreted as evidence that the economy has stabilised and a recovery is gathering momentum after fiscal support measures in August.

Sheng Songcheng, a former central bank official, said in the state-run Securities Times that the property sector would no longer make the same contribution to growth as it once did. But he suggested its weakness was “bottoming out” and noted that both infrastructure and manufacturing investment grew by double digits in September.

A rebound supported by investment and industrial activity, often state-backed, is a familiar feature of China’s past recoveries, especially in the aftermath of the 2008 financial crisis. This also happened in 2020 after the coronavirus emerged within its borders, but economists point to one major change in conditions that may affect recovery.

“The difference with 2020 is there is no tailwind on the export front,” said Carlos Casanova, senior economist for Asia at UBP.

Export data, while beating analyst expectations, nonetheless indicate a mounting challenge for the country’s recent economic model. They grew 5.7 per cent, compared to 7 per cent in August, and a further slowdown would reduce the effect of this key booster of GDP.

In much of 2020 and 2021, exports grew by double digits as the world shifted towards consumption of goods and western economies unleashed stimulus in response to the pandemic. Now, western policymakers are tightening policy and the effects of Covid-19 play a far smaller role in consumption behaviour outside of China.

Although exports only amount to 13 per cent of GDP, they have been a significant support to growth. Lu points to the example of last year’s fourth quarter, when China grew 8 per cent but exports rose 30 per cent, implying that they contributed around half of growth.

Sheng also noted in the Securities Times that net export of goods and services contributed 1 percentage point of GDP growth in the first three quarters.

Some analysts, such as those at CCB Investment, part of state-owned China Construction Bank, suggest that trade growth, along with investment, will remain a “pillar of growth” this year. But they say consumption will continue to be hampered by Covid controls.

Louis Kuijs, chief Asia economist at S&P Global, said the latest data showed the current zero-Covid policy was weighing on “organic” economic activity, which includes consumption and corporate and real estate investment. “Government-led investment is basically the only driver of growth that is functioning,” he said.

Markets, which responded to GDP data on Monday with a dramatic sell-off of Chinese stocks, are closely watching for any signs of further reopening post-Covid. They were lacking at the party congress and 28 cities are experiencing lockdown measures, based on a Nomura estimate.

While no timeline has been given for a relaxation of the rules, there are signs of adjustments to avoid an impact on investment. This week, the State Council, China’s cabinet, instructed provinces and cities to make it easier for staff of foreign businesses to enter and leave China, as part of policies to boost investment in manufacturing.

However, the elevation of Xi Jinping’s closest allies to the seven-member Politburo Standing Committee, the Communist party’s most powerful body, also hinted that growth is, for now, less significant than pandemic management. Xi’s loyal former secretary Li Qiang presided over a prolonged lockdown in Shanghai that contributed to anaemic growth of just 0.2 per cent in the second quarter.

On Sunday, he was promoted to the second-most powerful role in the country. 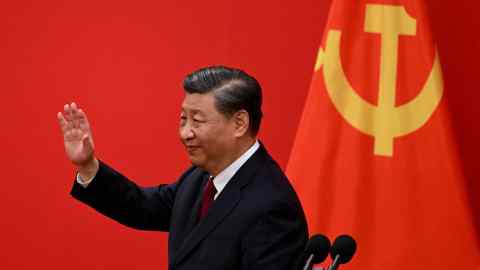 For major economies outside of China, the implications of a continuing slowdown in the world’s growth engine are unclear but stand to be profound. Within China itself, even as it shifts towards a more isolated ideological and geopolitical model, any slowdown elsewhere could have equally significant effects.

“Hopefully we can see some reopening and some retail sales picking up,” Casanova said. “That will definitely help with the economic narrative.” But “with risks of recessions crystallising in key markets in Europe and America, we don’t expect external demand will remain supportive,” he added.