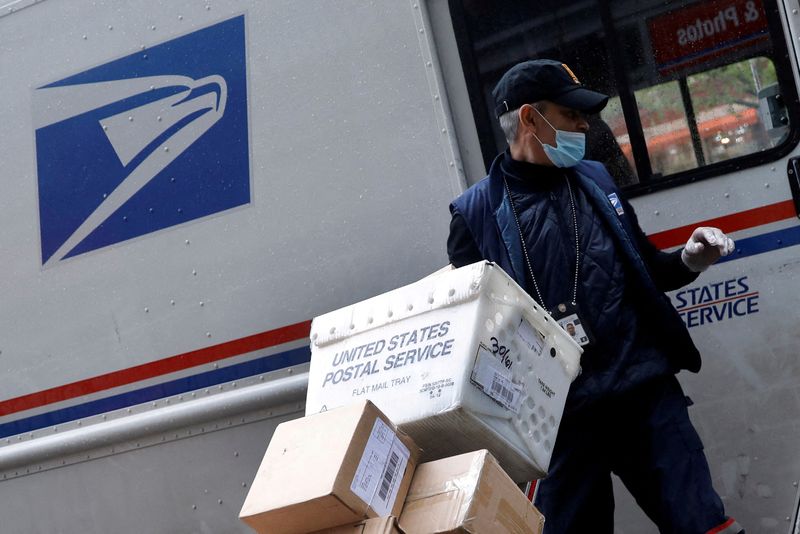 WASHINGTON (Reuters) -The U.S. Senate voted overwhelmingly on Tuesday to provide the long loss-making Postal Service (USPS) with about $50 billion in financial relief over a decade and require its future retirees to enroll in a government health insurance plan.

In a rare display of bipartisanship for a narrowly divided Congress, the 79-19 vote follows approval by the U.S. House of Representatives in early February and sends the bill to President Joe Biden for his signature.

Struggling with diminishing mail volumes despite having to deliver to a growing number of addresses, USPS has reported net losses of more than $90 billion since 2007. Last month, it booked a quarterly net loss of $1.5 billion.

The bill will ensure “this essential public service” is “set on a path to long-term financial sustainability,” said Senator Gary Peters, a Democrat who chairs the committee overseeing USPS and is a lead sponsor of the bill.

AFL-CIO President Liz Shuler, whose union represents postal workers, said the bill was the culmination of “15 years of efforts to fund and strengthen USPS.”

In addition to the postal unions, the bill also has the support of Amazon.com (NASDAQ:), the Greeting Card Association and Hallmark.

The legislation combined with operational reforms will mean “we will be able to self-fund our operations and continue to deliver to 161 million addresses six days per-week for many decades to come,” said Postmaster General Louis DeJoy.

Dejoy proposed some of the financial reforms in the legislation. The legislative financial changes are a key part of his March 2021 reform plan, which he has said could eliminate $160 billion in predicted losses over the next decade.

As part of the plan, USPS adopted new delivery standards in October that slow some first-class mail deliveries, a move that allowed it to shift significant deliveries from air to surface transportation, cutting costs.

One reason for the large losses is 2006 legislation mandating USPS pre-fund more than $120 billion in retiree healthcare and pension liabilities.

The new bill eliminates requirements USPS pre-fund retiree health benefits for current and retired employees for 75 years, a requirement no business or other federal entity faces. USPS projects it would sharply reduce its pre-funding liability and save it roughly $27 billion over 10 years.

It requires future retirees to enroll in Medicare. About 25% of postal retirees do not enroll in Medicare even though they are eligible, which results in USPS paying higher premiums than other employers. USPS estimates the change could save it about $22.6 billion over 10 years.

USPS will also be required to maintain six-day a week mail deliveries and develop an online weekly performance data dashboard by ZIP code, as well as expand special rates for local newspaper distribution.

Disclaimer: Fusion Media would like to remind you that the data contained in this website is not necessarily real-time nor accurate. All CFDs (stocks, indexes, futures) and Forex prices are not provided by exchanges but rather by market makers, and so prices may not be accurate and may differ from the actual market price, meaning prices are indicative and not appropriate for trading purposes. Therefore Fusion Media doesn`t bear any responsibility for any trading losses you might incur as a result of using this data.

Fusion Media or anyone involved with Fusion Media will not accept any liability for loss or damage as a result of reliance on the information including data, quotes, charts and buy/sell signals contained within this website. Please be fully informed regarding the risks and costs associated with trading the financial markets, it is one of the riskiest investment forms possible.